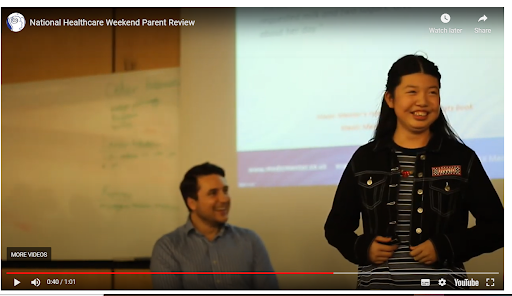 My name is Canbright Tianfield; I am a recent school leaver and aspiring medic from Glasgow.

I didn’t actually want to be a doctor until I finished sitting my National 5s and was picking my Higher subjects. The first time I began to question what I wanted to do in the future was at an event called “Imagineer the future” at Glasgow university. After the event happened, I began thinking again of realistic jobs and careers that I was interested in, this led me to sign up and take part in Glasgow’s S4 Medic Insight Day that gave a small taster of what it was like to be a doctor, and snippets of life at Glasgow medical school which increased my interest in the vocation. It took me a while to accept that I honestly wanted to be a doctor because I didn’t want anyone think I was a stereotype Asian or that my parents forced me to do this without my autonomy when in reality I was torn between engineering, law and medicine (spoiler alert: I chose medicine).

From these two events I had an idea of a career in medicine but didn’t know how to go about it. I was fortunate to be told about events such as Medic Mentor’s National Healthcare Weekend and Glasgow’s Medic Insight from school. When I signed up for National Healthcare Weekend I thought it would be similar to Glasgow’s S4 Medic Insight day, boy, was I wrong! Rather than highlighting only the clinical and fun practical activities that medical students take part in, the “clique” nature of most to all people staying with those from their school, the fear of being stupid for asking questions, being intimidated by other S4 students, medical students, the professors and admissions team; instead I was in awe with the presenters as no two were alike, the open mindfulness of there being more than one way to succeed in receiving at least one medical school offer and that me and my dad were able to ask questions without the fear of being judged. One thing I think that National Healthcare Weekend did better than Medic Insight was humanizing the current medical students and doctors by showing that they once struggled and they may have had the same worries as me, and that anyone could get at least one offer to become a doctor in the future. After National Healthcare Weekend, I signed up to the school ambassador programme, summer school and emailing the Mentor Magazine straight away. It has come full circle now as I have helped to organise it as well and by presenting, realising my growth within a year and that I can do this!

The school ambassador programme has improved my current skills, expanded my knowledge whilst learning from doctors and medical students as well as working with my future colleagues.  Although I was fortunate enough to hear about events from school, there was one problem: there was no medic society at school. As a school ambassador I tried to set up a school society but it has been getting revived each year, to allow the school society to answer burning questions and keep in touch during holidays a group chat was set up. When talking to people who are interested in a career in medicine, dentistry or veterinary medicine but don’t know where to start I would recommend them National Healthcare Weekend. For my friends who applied to medicine I would share my Medic Mentor resources with them and encourage them to join the growing Medic Mentor Family. I ended up getting Medic Mentor alongside Disney’s Frozen as my high school reputation.

Unforgettable and worth the money would be how I would describe my summer school experience. With many redrafts of my personal statement, a variety of interview questions and scenarios, hints for the UCAT and BMAT with the sun shining and being with my friends – there isn’t more I would ask for. It was a productive holiday. The support did not stop when summer school finished, I was in touch with mentors who didn’t mind a random spam of medically related questions and friends who were stressing at the same time as me.

Taken directly from my yearbook profile: Medic Mentor is my other half; I don’t think I would’ve made it to where I am today without their consistent support from the weekend I found them to now.  The resilience, adaptability and humanity all shine through the mentors and students through their work in making you into a better person rather than a number.